New moon Aries. 3/27/17 Valuing the self without devaluing others. 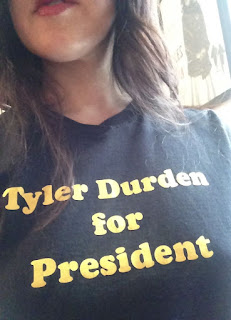 (Spoiler alert)
No. I do not think Tyler Durden should actually be president. This was a bday present I received because I’m a huge Fight Club fan (movie and book). In fact, an ex and I used to joke that we should watch it once a month, sort of like going to church, to remember and pick apart the myriad spiritual and philosophical teachings the story offers. I think it’s a good illustration of the current Venus retrograde Aries situation amidst a maelstrom of Aries and cardinal energy in March/April.

For those of you who have not read or seen Fight Club, it’s not so much about machismo and brutality, as it as about the patriarchal gone awry, capitalism, and the consequences of sacrificing our animal-body nature to fit inside of man-made structures.

The protagonist, who does not have an official name, is your run-of-the-mill consumer. An unconscious go-along-to-get-along kind of guy who fits very nicely and quietly into society. He wants all the things he’s taught/programmed to want..all the things we assume everyone wants. His alter ego, Tyler Durden is an id-like character (Aries), who’s “free in all the ways you aren’t.” The mild-mannered protagonist and Tyler duke it our literally and metaphorically for control over their life. While Tyler will terrorize everyone that stands in the way of his desire for pure anarchy, the protagonist struggles to integrate the repressed wildness of his nature in a more socially acceptable form (Venus).

And they start a fight club, but that’s a whole other thread. But, I would definitely add this book to the dystopian reading lists that are being curated right now.

This could very well be the Aries mantra. Unfortunately, this post is long, complex, and messy…because that’s how this Aries season is barging its way in.

I have a stellium in Aries and a strong Scorpio signature. Basically, I’m a Martian. Mars-ruled Aries season is usually home for me. I get to wake up from the boozy haze of Pisces, and have a cup of fucking coffee and get on with it! For the most part, that’s what we’re looking at this Aries season…with a catch. In honor of Aries, here are some bullets:

That’s a lot of Aries. That’s a lot of  “my way or the highway,” “I want it done yesterday,” “coffee is for closers” Aries. Aries gets in, gets out, moves on, and doesn’t look back. It rules surgeons, warriors, and the steel they use to cut. Let’s not be literal. There are many ways to perform surgery, do battle, and cutting utensils come in many forms. You want decisions made quickly and projects initiated? You call Aries. Aries is the immediate response to the primal. Fire signs operate at the speed of light because they’re motivated by intuition and impulse. Thinking (air), feeling (water), and sensing (earth) take time, and in the case of earth, matter (can I touch it?).

So, how do you think Venus feels, placed in the sign of its detriment AND retrograde?  Oh, this is awkward. Venus makes nice, wants everyone to get along, and it’s not enough for Venus to meet its goals…it must do so in a civilized manner, with much beauty. Venus is in no hurry. Consultation, consensus, and deliberation take time. Venus rules ambassadors, diplomats, farmers, artists, and culture. So, imagine that we put Venus in a suit of armor, machete in hand, and then push it backwards. THIS is the “fly in the ointment” of what should really be some straightforward, fire-under-the-ass, springtime, blast-off energy.

Venus-ruled folks in particular  (lots of Taurus and/or Libra) could feel especially irritable now, but this applies to everyone because we all have Aries represented somewhere in our chart, and Venus is moving through it. Venus is going through a process of questioning the importance of participating in consensus reality.

Venus is asking if all the little concessions and compromises we make to “grease the wheels,” participate in relationships of all kinds, and cultivate various forms of beauty are WORTH IT. A keyword for Venus is value.

Venus is not as concerned as it usually is to make things pleasant for you right now. It has increased awareness of animalistic stirrings, and less patience for dealing with protocol, ceremony, contracts and other social constructs. Venus is trying to weigh how much to “play the game” against going rogue.

This (very rare) transit often reveals where you may have compromised too much of your raw self in the quest for relationship, status, or comfort. It could also reveal an issue with
your ability to consider other people and the world around you. Aries AT ITS WORST does not consider other people when taking action. Most often, it doesn’t even mean to harm…it just doesn’t see you there. This energy has no time to be strategic, or conniving…or ask permission, or make things pretty. Which ALSO means that Aries AT ITS BEST does not consider other people when taking action. It has a direct line to individual needs and acts on them.  Therefore Aries is usually authentic and tells the naked truth. Peer pressure doesn’t work with these folks.

I could go on about this whole Venus/Mars thing, but this is the gist. It’s a time of weighing how much “you do you” vs. your efforts to fit in nicely. It’s about re-thinking the transactions you make with other people. Are you getting good value for your money, time, love, your soul?

Initiations at this new Aries moon can be made with heightened awareness around the actions you take based on your deepest values. Learning how to be unpopular in your own self-interest without de-valuing anyone else.

Posted by Body Intelligence at 10:20 AM