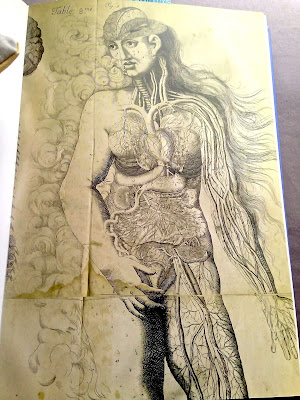 It's a time when we get stripped down and scrubbed sparkly—a big, sexy slough of old identities, fake smiles, and toxic secrets collects at our feet.

We step out into the world, exposed.

Personally, I like a good scrub. Inspect my bathroom and you’ll find all manner of exfoliant, loofah, and body brush. Once in a while I’ll treat myself to a microdermabrasion facial. It’s just a very deep exfoliation that’s done with a diamond-tipped wand (doesn’t hurt). This wand removes dead skin cells and makes microscopic cuts in the skin that cue the skin’s own regeneration process (it lives!). The removal of dead cells reveals brand new skin that can breathe and absorb whatever it comes into contact with more deeply (so hopefully you’re putting good, nutritious stuff on your skin).

I know, not exactly a conversation for the dinner table…dead skin, clogged pores, and all. But, that’s Scorpio. Scorpio has no use for anything superficial; it wants to know what’s underneath. It has the stomach for all the gory details, and always wants to “go there.”

“The Edge... there is no honest way to explain it because the only people who really know where it is are the ones who have gone over.”--Hunter S. Thompson (Mars in Scorpio 8th house trine Sun-Pluto conjunction, moon 8th house. That’s a lot of Scorpio)

A Scorpio full moon is always opposite a Taurus sun and sheds light on this dynamic:

Yeah. I went there. Couldn’t help it. It’s such a perfect example of the extremes between Taurus and Scorpio. Everyone can relate to these body functions, and the metaphors can go on ad nauseam. Poop is also fitting because Scorpio rules the waste disposal process and reproductive organs. Yeah, all that “down there” stuff. Most people think of Scorpio as the sexy sign, which it is, but we forget it also rules forensics, investment banking, psychology and death. Believe it or not, these things have EVERYTHING to do with the KIND of sex Scorpio wants to have.

There are a million ways to do sex that are healthy and fun, and may or may not involve physical penetration (jeez, do we as a culture get hung up on phallic penetration as the defining act of sex or what), and may or may not involve other people. There’s recreational (Leo) sex, sensual (Taurus) sex, affectionate (Libra) sex, animal (Aries) sex, and on and on. The kind of sex Scorpio wants to have is going to cost you something. Now before you get all proud of yourself because it’s so easy for you to share, chances are that if it’s that easy, it’s not actually costing you anything. When something costs us, we’re talking about loss, our sense of security—being vulnerable. Scorpio wants the parts of you that are hardest for you to part with.  The price is high because what Scorpio offers in return is new life and higher power. I think that’s fair. Except when it’s not. Unchecked Scorpio energy manipulates in the name of absolute power. It can become obsessed with power, and boy is it shrewd and ruthless.

There must be stakes or else Scorpio is not interested. If Scorpio doesn’t walk out of an interaction a different person with a whole new perspective on life---if they didn’t leave a chunk of their soul behind or take a chunk of your soul with them, don’t expect to see them again. Anything short of a religious experience won’t be worth the effort. The Scorpio sex-perience needs you to invest---give up a precious part of yourself in the name of a merger that’s transformative. Through this merger, Scorpio is scrubbed clean with diamond blades. It dies unto itself so it can regenerate with tender new skin and be penetrated. Scorpio sex is alchemical. It is the penetrator and the penetrated—the scalpel and the incision.

Scorpio also has x-ray vision and wants what you got. The psychotherapist needs YOUR deepest feeling/thought material to create new solutions, the investment banker needs YOUR hard earned assets to turn them into something bigger, and a detective would be out of job without YOUR secrets to uncover. In the wrong hands, this ability to work with other people’s stuff can lead to ttrademark Scorpio jealousy.

Where might you fall on the possession/power axis that is Taurus-Scorpio?  Right around this time we’re likely to go to one extreme or the other. This full moon should reveal how much exposure you can stand (emotionally, financially, psychologically) and how close you’re getting to the edge. There’s no tightrope walking during a Scorpio full moon. You either jump into to the abyss or retreat into familiar territory. All or nothing. High stakes.

This full moon chart speaks to the closing of a chapter. The full moon (fruition) in Scorpio (death/rebirth) sextiles Pluto (modern ruler of Scorpio), and is accompanied by the changing of the lunar nodes on the Virgo-Pisces (final rest) axis. We’ve been exploring our capacity wake up-and-deal and retire-and-heal for 18-months. We’re sure to feel a palpable shift as the nodes move onto the Leo-Aquarius axis. The nodal shift and the apex of the full moon happen within 24 hours of each other. Something in you or your life is wrapping up. Can you feel what it is? And, no. You are not exempt from Scorpio. It’s represented somewhere, to greater or lesser degrees in everyone’s chart.

We’re all made of the same stuff…just put together differently. It’s YOUR job to find how your relationship to the world works. It’s YOUR job to uncover all the ways you’re similar to your fellow humans, animals, plant life, and cosmos.

That’s astrology.  It’ll cost you some effort---maybe a leap of faith and imagination. The rewards are plenty.
Posted by Body Intelligence at 11:35 AM